Getting to the Summit of Mt Muhavura 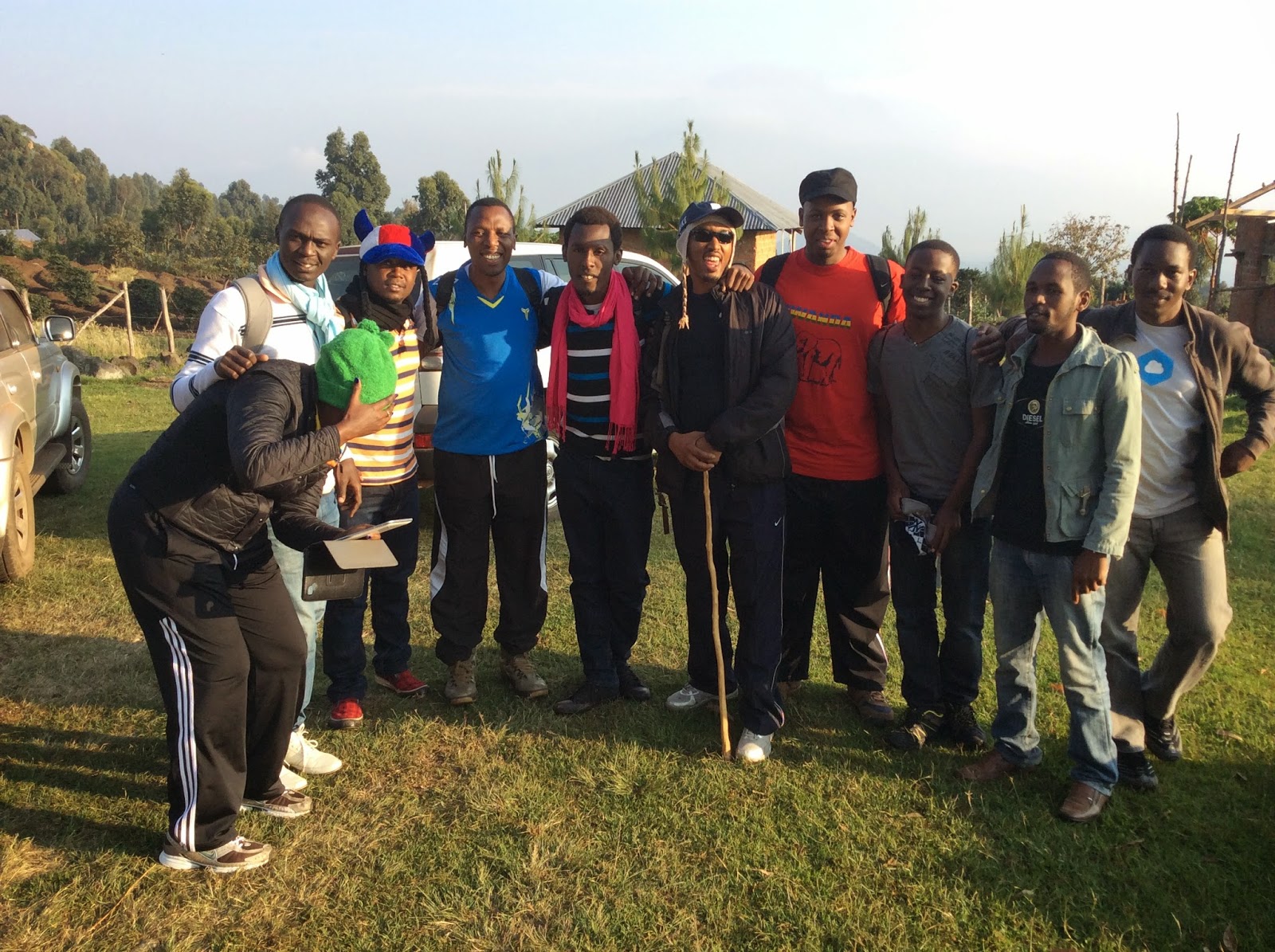 On a cold morning of the 8th of August, at around 7:30 a.m in the morning, In a group of 8 men and 1 lady, we set off to the base camp of Mt Muhabura, the extinct volcano in the Virunga mountains on the border between Uganda and Rwanda.

All wrapped in heavy clothes to provide some warmth, we arrived at the base camp at exactly 7:57 a.m. Ready to get a small briefing about the toughness of the challenge we had all deliberately taken, we sat on some beautifully crafted wooden benches and our lead went on to have a little chat with the Guides in charge. A guide made some quick key notes, handed each of us sticks that he claimed would be very helpful, after which he declared that we were ready to go.

Just about 8:30, we set off for the summit of arguably the steepest mountain in East Africa that is 4,127m (13,540 ft) above sea level. With one guide in front of the group and a porter behind us, we set out for the first phase of the volcano, a massive forest which we hiked for nearly 2 and half hours. After a tough climb, we asked the guide how far we were from the first resting point, he bluffed and said not anywhere close. Four energetic guys peeled off the group to climb at a faster pace. Shortly we could not see each other anymore. Having a lady with us, we had to keep a low pace so that she wouldn’t lose the motivation. We climbed climbed and climbed, but weren’t getting any closer to the resting point. Finally at about 10:50, we reached the first Hat, which the porter called the first resting point. I still had enough fuel and had enjoyed the climb. We took several pictures here, gazed at the amazing vegetation that surrounded us, sipped on our refreshments and were ready for phase two of the climb.

Straight up, we continued the climb. Gradually the climb got tougher and tougher, we started noticing the steepness as we were standing at an angle of probably 60 degrees to the surface. The biggest indicator of how tough the climb had got, was the silence, the conversations were slowly collapsing and people were only concentrating on their steps upwards. One by one we started complaining, Knee aches, Harm strings, Muscle pulls, Heavy backs, straining calf muscles and lots of others. At least every one was suffering some sort of pain. It got colder and colder, the heavy attire that most of us had packed cause of the endless sweating became useful once again. So people pulled out their sweaters and Jackets. One of us hilariously spoke out his exhaustion and said, “THIS IS THE WORLDS BIGGEST MISTAKE, I UNDERSTAND WHY PEOPLE HAVE NO DESIRE TO COME UP HERE”. As much as we were in pain, we laughed and laughed and laughed. The pace grew slower, as we had began feeling the effect of the high altitude. We got to the rocky part of the volcano that seriously drained gas out of us. While staring at the beautiful landscape, we crawled all the way to the second resting point. Here, I first laid my tired body down, as others rushed out there cold drinks and frozen tasteless chapatti’s. All we did here was to drink and eat. With little fuel left in us, we couldn’t waste our energy taking pictures and reflecting on how tough it had been so far.

After short debates of who amongst us were still up for the challenging climb, with our worn out biceps, we continued the hike. Surprisingly, the one lady we had was still on course with us. The weather was already in-habitable for us, the wind whizzed by us non-stop. Surely at this point I thought I couldn’t take it any further. Altitude sickness was in control of my body and I was getting weaker, but I carried on.

We were making roughly 50 steps and then stopping, looking in front and nodding our heads, then making another 50 steps. This went on and on till some of us decided to create our own resting points. I had been left with just the guide and my little brother, we stopped to rest via some ladders, and were getting more and more worried at this point. The guide told us, we had to be at the summit by 2 p.m so that we would make it back down before it got dark, otherwise we would be required to turn back. So, we picked our weak bodies up, and battled the climb slowly. Close to the summit, the remaining third of the volcano was like a wall, It was so steep that if any one of us made a slight off-step, they would fall backwards. I kept asking the guide how far, and he kept telling me, to just move. The vegetation at this point was not that tall, so at least we could see the peak. Despite the continued feeling in me that made me think I would never make it, I pulled myself through the steep ladders and finally arrived at the summit. At around 2:30p.m, the whole group finally made it. We were all excited for the accomplishment despite the pain, I took the last half of my frozen tasteless chapatti and finished my 500 ml coke. We enjoyed it up there with the magnificent scenery of the Crater Lake and the rare vegetation, took a few pictures and were ready for the return journey.

After a 15 minute rest at the summit, in the thick clouds up there, we headed down at around 3p.m. This is when I got the first piece of knowledge about climbing that I could pass on to someone else, “Never rest for too long when hiking”. Having maximized the resting time up there, when i sat for too long, muscle pulls started coming in, one by one, I couldn’t move 10 steps without squatting, and even when I would squat, it would still be painful. The pain was simply unbearable, my calf muscles were not in condition of any physical activity. We were all in bad shape. The slopping became serious trouble, Indeed slopping was tougher than the climb. We moved like snails till the first stop. The trail that we used on the climb seemed different on the slope. It looked narrower and more slippery. I felt like throwing away the bag pack and my phone, everything was heavy to carry. It’s only my Stick which turned out to be the most useful asset as it was working as brakes and shock absorbers for my wrecked body. In fact, some people peeled off and I stayed with 3 other guys and the guide, lucky enough I had one of the fittest guy in the group, Benjamin, Much as we were struggling, he didn’t seem to go through the same pain as we all did. I made good use of him as he kept waiting for me with the increasing stoppages.  Later on, I gained momentum and pushed my body, but still suffered every time we met ladders and very steep paths. By the next stop, we were literally skeletons moving. The guide didn’t let us stick around that long cause it was getting late.

Finally we found the zigzag gentle paths that we had longed for on the way down, it clocked 6 p.m and we were still in the forest, the guide had to call for some light as he anticipated that, it would get dark while still in the forest. Three other guides came along with the torches, we began hearing some sounds coming from down and thought that we were almost there. Little did we know that, we still had a 40 minute stressing walk. Annoyingly, the guides kept on lying to us that we were almost there, we turned and turned and turned through the zig zag paths, but still couldn’t find the base camp. After close to 5 hours, our journey back came to an end. We didn’t even sit, all that we wanted were the vehicles we came in. A few minutes after 8p.m, we were back at the starting point, we just dived into the vehicles and went back to sleep.